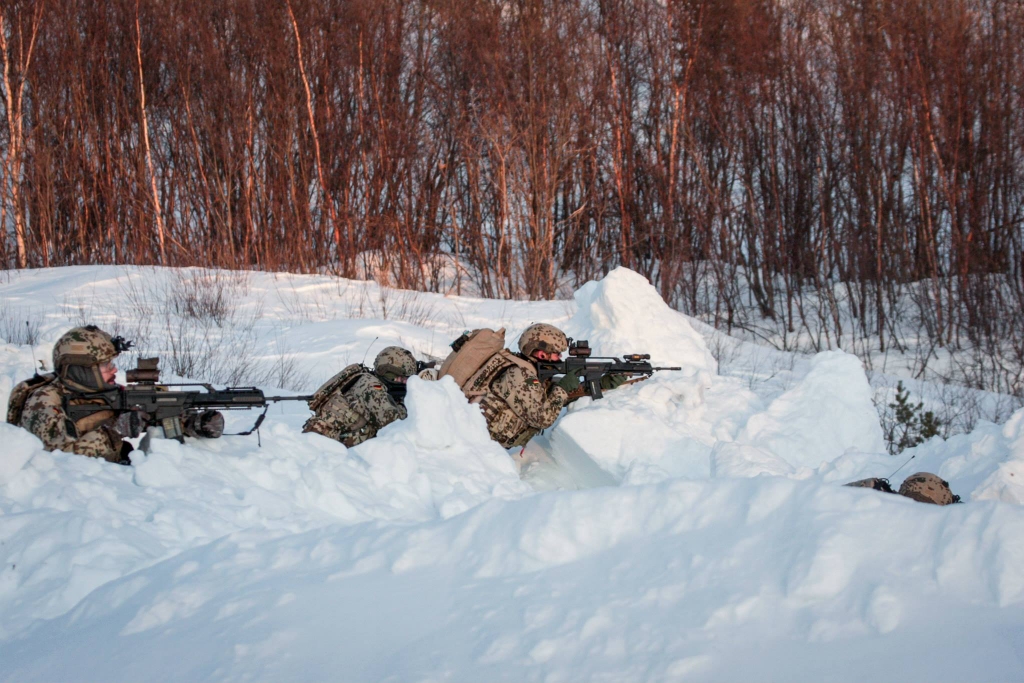 The latest decision by Deputy Defence Minister Katrin Suder is part of a wider scheme aimed at remedying a capability gap which the German Army has recently identified, namely, that its troops might be at risk during operations because of limitations caused by a lack of accuracy of H&K’s G36, the German Army’s standard issue 5.56x45mm assault rifle, of which approximately 178,000 examples have been bought by the German Armed Forces (Bundeswehr) since the mid 1990s.

Although the German military indicates that the exact causes of the problems with the G36 have not yet been identified, being the subject of further research that will be finished by late this year, the lack of accuracy appears to be caused by excessive heating of the rifle’s barrel when delivering continuous fire. Hence, the decision to order a version of the HK417 along the lines of the G27P, a precision rifle used by the German Army Special Forces together with an additional 600 5.56x45mm H&K MG4 light machineguns.

While insisting that the G36 is a perfectly reliable weapon, Germany’s Chief of Defence Gen. Volker Wieker, as a first precaution, took steps in April to have German military units, deployed overseas, informed about how to deal with the already mentioned issues surrounding the G36; this in order to overcome the G36’s specific limitations to the best extent possible.

The decision by the MoD to enhance the Army’s small arms mix by a short term introduction of new weapons must be seen as an interim measure aimed at negating the shortcomings for soon be deployed units, pending the outcome of the ongoing G36 investigation. One of the options for a structural remedy would be a capability upgrade of the existing G36, something for which the Bundeswehr has had only lukewarm attention up till now.

Procurement of the 1,200 new weapons will cost around €18 million with a first batch of 60 G27s to be ordered by November at the latest, assuming there will be no negative feedback resulting from trials that are currently ongoing with the weapon. The remainder of the weapons would then be delivered by June next year, clearing the way for the G27 to be used during operations from the second half of 2016.  All 600 additional MG4 machingeuns will be delivered by late 2016.

The G36’s manufacturer has vehemently denied it might be at fault, saying in its defence that the Bundeswehr itself recently revealed that during tests in its class only the HK416 assault rifle had shown to be superior to the G36. As the latest HK416A5 and HK416A6 were not made available to the Bundeswehr by H&K, the company claims, the weapon tested in late 2014 appears to be a so-called HK416Bw, a HK416 variant that is on offer as a light support weapon for use by German Army Special Forces and military police. However, unlike the G36, the HK416Bw is equipped with a thicker, heavier barrel very similar to the one used on the MG4 light machinegun and thus better capable of withstanding the heat caused by continuous fire, with H&K insisting that the G36 currently used is not capable of serving as a light support weapon. Questioning the MoD’s findings about a capability gap, the manufacturer from Oberndorf in Germany also insists that the Bundeswehr has never called for any serious upgrade of its G36A1/A2 assault rifles except for the introduction of Picatinny features and an adjustable, collapsible, folding buttstock as part of the G36A1A1 upgrade. Denying suggestions that its use of glass reinforced plastic, which is used for essential parts of the weapon, might be the cause of the problem, H&K has made clear that its assault rifle was cleared of all blame in late 2013 when an earlier series of trials showed that faulty ammunition was to blame.

Although both are in the 7.62x51mm caliber, the G27 must not be confused with the G28, also from H&K, which is semi-automatic designated marksman rifle (DMR) already in use with the German Army. Having 75% parts interchangeability with the HK417, this weapon is based on the MR308 competition rifle with an additional conversion add-on kit allowing users to convert the standard G28 E2 into an E3 Patrol version that can then be used as an assault rifle.

In addition to closing what is perceived a capability gap by the military, the latest decision to procure new weapons from H&K also appears to be intended as a means to reduce the level of tension that now exists between the MoD and its principal small arms supplier. With Germany’s Minister of Defence Ursula von der Leyen being at odds with parliament over who is responsible for the cost overruns with which a large number of the Bundeswehr’s major armament programmes have been confronted, the row over the G36 has been called a politically motivated attack on the manufacturer by some commentators.