Turkish Aerospace Industries (TAI) is launching its “T129 ATAK Poland Roadshow” 22 August  – 4 September 2015. The T129 ATAK Advanced Attack and Tactical Reconnaissance Helicopter is a candidate for the KRUK Programme of the Polish Armed Forces. During its visit to Poland, the T129 ATAK will perform demonstration flights for the Polish defence industry and aviation lovers, aka AV-Geeks. 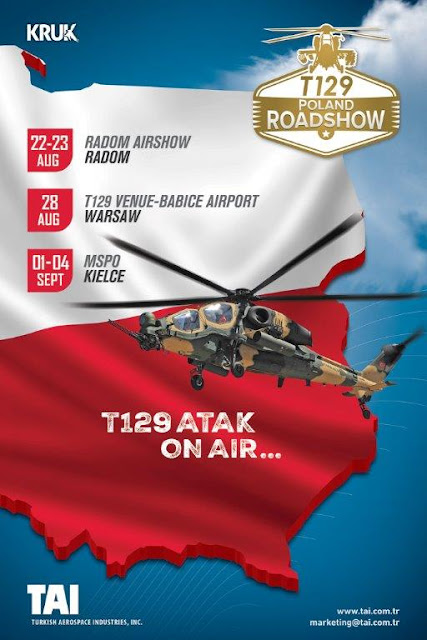 The T129 ATAK Helicopter will make its first ever public appearance in Poland during Radom Airshow 22-23 August 2015. Visitors will have the chance to witness the T129 ATAK’s performance and maneuverability during demonstration flights at 15:20h on both days.  More information about the T129 ATAK will be available on TAI’s stand at the show.

The T129 ATAK helicopter will be presented to Polish and Turkish high officials, industrial partners, and the media at a private event with a flight demonstration at Warsaw-Babice Airport on 28 August 2015 and it will appear again on static display at the TAI stand at MSPO Kielce, 1-4 September 2015.