Paris Air Show 2015: Roketsan Displaying a Range of its Capabilities

At this year's Paris Air Show, Roketsan, with its state-of-art technologies, is hosting delegations and press from the United Arab Emirates (UAE), Morocco, Moritania, and other countries in Hall 2a Stand B272 . Products such as the SOM-J Stand off Missile and TEBER-81 and TEBER-82 Laser Guided Bomb Kits (publicly unveiled at IDEF 2015) attract great attention from visitors throughout the world.


Roketsan expects to conduct the preliminary design review (PDR) of its SOM-J Stand off Missile (a version of the company’s SOM adapted for internal carriage in the F-35, but also available for external carriage by other aircraft) this September, with subsystem design and test activities to commence in November. Roketsan received the first production contract for the original 155mi-range SOM version in mid-2013, having developed the weapon in conjunction with Tubitak-SAGE, and being already in service with the Turkish Air Force’s F-4E-2020 upgraded PHANTOMs and F-16C Block 40 aircraft, while Roketsan has a cooperation agreement with Airbus Defence & Space to study integration with the Eurofighter TYPHOON.

In 2014, the company signed a deal with Lockheed Martin Missiles and Fire Control to collaborate on the development and marketing of the SOM-J derivative. Compared with the original SOM, the F-35 weapon has kinked rear fins, an additional set of small rear fins, revised main wings of shorter span, reprofiled nose section and the engine intake moved from underneath the missile body to the side. Many of these changes were driven by the necessity to fit the missile into the F-35’s weapons bay. It sports a combination of guidance systems, including GPS, inertial, terrain reference and imaging infrared seeker. Phases I (feasibility) and IIA (risk reduction) have been completed, and the Phase IIB studies have begun this month, building up to PDR. The first flight tests are due to begin in the second quarter of 2017, initially conducted from the F-16 Block 40. Development and integration with the F-35 are due to be completed in 2018. 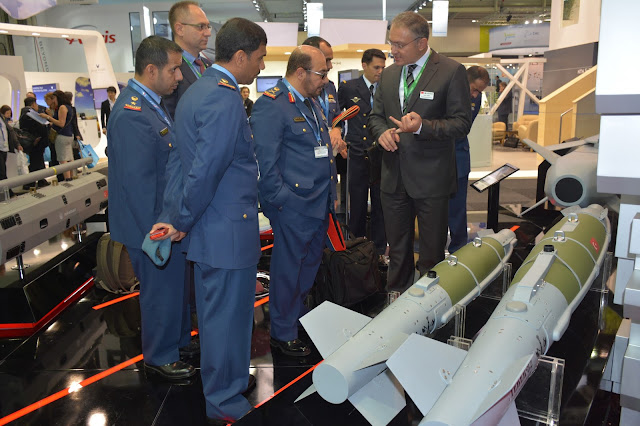 The TEBER-81 and TEBER-82 Laser Guided Bomb Kits modifies 250lbs Mk 81 and 500lbs Mk 82 bombs into guided weapons that can be aimed with an accuracy of less than 10ft/3- circular error probable (CEP), and with capability against targets traveling at up to 60mph/90kmh. The TEBER kit adds a body strake section, laser seeker on the nose and a tail guidance kit with inertial navigation and GPS/GNSS receivers.

Also on display is the UMTAS missile that is intended primarily for anti-armour duties, with lock-on before and after launch capabilities over a range of up to five miles. The initial version has a laser seeker (L-UMTAS), but an imaging infrared version is also being developed. The missile can be fired from a variety of air, sea and land platforms but the initial application of L-UMTAS is the Turkish army’s new Turkish Aerospace Industries (TAI) T-129 ATAK helicopter. Successful firing tests from the T-129 against land targets have been undertaken, followed recently by firings from SH-60 SEAHAWK helicopters against maritime targets. Deliveries to the Turkish Armed Forces are expected to start later this year.

Also forming part of the T-129’s armoury is the CIRIT laser-guided rocket, which has also been selected by the UAE for use on its IOMAX ARCHANGEL border patrol aircraft. Currently in use with the Turkish Army’s Bell AH-1W COBRAs and on Airbus Helicopters' EC635s, CIRIT is a contender for the German Army’s laser rocket requirement to equip the EC665 TIGER attack helicopter. Roketsan has teamed with MBDA Deutschland to bid for this requirement. 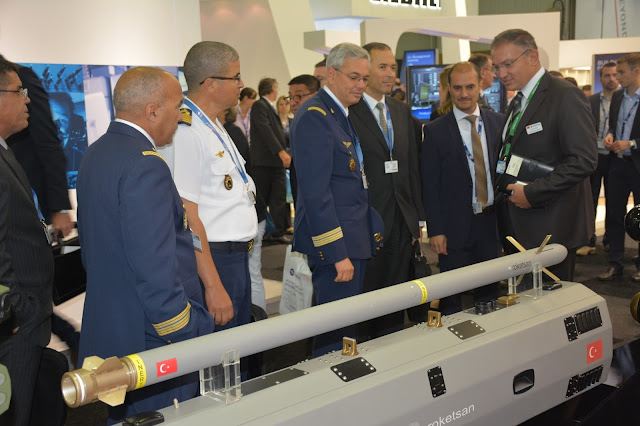 Posted by MILITARY TECHNOLOGY at 07:58