During Paris Air Show 2015, Thales is promoting its Watchkeeper enhanced tactical UAS capability for which it hopes to get new contracts. One of the potential customers could be the French army which is seeking to acquire new tactical UAS to replace its current Sagem Sperwer systems while Poland too is seeking a similar capability. Other regions being targeted are the Middle East and Asia Pacific. Thales touts Watchkeeper as a high end system that can support “dynamic mobile and expeditionary operations”. A strong selling point of Watchkeeper is its dual sensor payload. This includes the Thales i-Master SAR/GMTI/MMTI radar which is easily swapable with an EO/IR sensor.  Watchkeeper also comes with ATOLS, dual redundant and encrypted datalinks, RVTs and a GCS.

Speaking to MT prior to PAS15, Pierrick Lerey, strategy and marketing director for Thales UAS and ISR activities, said: “We designed Watchkeeper to be robust. It has no need for fixed infrastructure,” with it being easily transportable and able to operate out of improvised air strips. Designed to operate in challenging operational environments, “Watchkeeper is capable of performing fully autonomous operations once waypoints have been punched in, the pilot being there for safety,” according to Lerey.

It took Thales seven years to design, manufacture, test and deliver Watchkeeper. However, much of the delay that occurred was due to the need to certify the system with the final design stage already having ended in 2007. The UK MoD has admitted that an “underestimation of the challenges of delivering sufficient quality evidence to underpin the Watchkeeper System Safety Case led to the delay to the achievement of the system Release to Service (RTS)”. As a result however, Thales now claims that Watchkeeper is the first UAS which is certified according to EASA CS23 and NATO STANAG 4671 standards, hereby ensuring a high level of safety, allowing it to operate over civil areas. In addition, Watchkeeper meets UK defence standards (DEFSTAN) and is certified by the UK Military Aviation Authority (MAA).

The French requirement appears to be close to the UK requirement for which Watchkeeper was initially conceived. However, Lerey made clear that “Watchkeeper is now a modular product having evolved from being a solely UK programme”. On the other hand, future customers will benefit from UK investments as part of the country’s through life plan for Watchkeeper and vice versa. As technology and threats evolve over time, the British are already funding a series of enhancements to the system enabling it to stay into service for years to come with Watchkeeper’s out of service date now being planned for 2042. Lerey also indicated that “Thales will launch a Watchkeeper customers club” which will enable the sharing of attrition stocks, changes and repairs as well as training schemes, CONOPS, feedback and lessons learned.

As new customers might require local content, Watchkeeper’s new modular architecture allows for the easy integration of so-called “sovereign” building blocks such as tactical datalinks or sensors. Thales has in the meantime also started an international suppliers club which allows it to select the most competitive and efficient companies in each country to provide such building blocks. For the French bid, Thales has selected 35 companies across France as it is “Thales’ goal to reach 35 per cent French content for the French programme” according to Lerey. For the French army requirement, Thales is proposing a new HD EO/IR sensor, for which it is partnering with Lheritier Alcen, a COMINT/ESM payload, and a sovereign datalink compliant with STANAGs 7085 (ISTAR data) and 4660 (C2). Also unique to the French bid are the systems’ connectivity with the French forces’ C4ISR system and full compatibility with the ROVER 4 and 5 RVTs used by the French military.

Colonel Craig Palmer, SO1 UAS HQ British Army, spoke to MT prior to PAS15 about the British army’s experience with the Watchkeeper system. Having operated with the previous Hermes 450 and Desert Hawk in Iraq and Afghanistan, Palmer explained: “we have ten years of experience which has been forwarded into the Watchkeeper programme. It is a tactical system organic to the army making it highly available to the commander, hereby enabling intel-led operations." He continued: “as we had military and civilian applications in mind from the outset of the Watchkeeper programme, we routinely overfly urban areas, which is the target area for military operations. We have flown Watchkeeper in the United Kingdom over Salisbury”. By now the British army has received more than 30 Watchkeeper air vehicles out of the 54 that are on order. This includes a number of attrition reserves as, according to Palmer, the UK need is for 13 systems consisting of two air vehicles and a GCS. The remaining two GCS appear to be used for training.

Over three years late, Watchkeeper was released to service on 28 February 2014 with considerable help from Thales. Routine training flights take place at the MoD/Qinetiq test centre at Boscombe Down with the system being operated by the 32nd Regiment Royal Artillery. Since 2011, a small number of personnel from the regiment’s partner unit in France, the Chaumont based 61st artillery regiment of the French army, have been working on Watchkeeper in the UK alongside their British colleagues. Eventually, the Watchkeeper systems are planned to move to Larkhill where they will also be operated by the 47th Regiment Royal Artillery.

IOC was achieved on 31 August 2014 while the first flight in Afghanistan was performed on 2 September. Still working alongside the Hermes 450s, Watchkeeper was declared operational in theatre on 16 September with support being provided by Thales personnel in country. Standing off at 12 km, Watchkeeper performed its first operational mission that day with the system being used to cue the sensors of Hermes 450s while a MQ-9 Reaper MALE UAS was tasked to strike, this resulting in two enemy KIA. According to a recent House of Commons briefing paper “three Watchkeeper aircraft flew for a total of 146 hours in Afghanistan in September and October”. 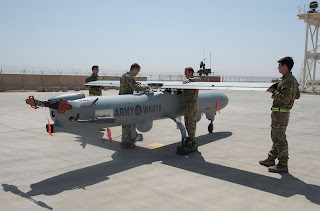 While the Hermes 450 was an UOR, Watchkeeper is a programme of record with its own full acquisition cycle. The UK Watchkeeper is currently equipped with an Elbit Compass EO/IR sensor pod together with the i-Master SAR which Palmer considers to be “a gamechanger”. Change detection software is being used in conjunction with SAR. Future options will likely include wide area motion imagery, COMINT DF while two EO/IR sensor pods could be combined to deal with multiple areas of interest. Palmer explained that “’there was an enhanced need for ISTAR as we were vulnerable as we withdrew from Helmand in Afghanistan. Watchkeeper went there because of its radar” with the system enabling a level of wide area surveillance equal to that of three Hermes 450s apparently. Palmer: “the growth path is to move to austere bases instead of infrastructure like camp Bastion in Afghanistan. The essence of tactical systems is that you need to be mobile and have the ability to operate in austere conditions”. 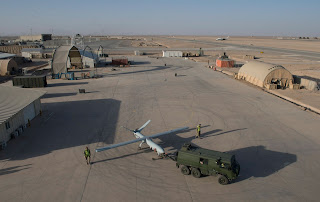 With Watchkeeper’s typical LOS range being 150 km, Palmer explained how the British are able to reach a 450 km radius by forward deploying a GCS which enables a so-called “handover/send” procedure. Palmer detailed the system’s endurance as being 16 hours, this enabling persistent surveillance.

With the first proper training course for Watchkeeper to be held from October, FOC with system is expected to be reached in 2017. Near term enhancements for the British fleet will include de-icing, austere strip location capability and mapping ingest features.