During Paris Air Show 2015, Thales demonstrates the wide range of UAS the company is working on as part of its C4ISR portfolio. Right now, the French company is involved as a prime integrator in a series of micro, mini, tactical and VTOL UAS programmes while it is also a Tier 1 partner working on MALE UAS and UCAS. In these programmes Thales brings in some of its considerable expertise it has built up over the years delivering advanced mission systems such as avionics, sensor payloads, secure communications and ground control stations. Also on display during PAS15 will be Thales’ solutions with regard to data processing, simulation and training while the company will also promote some of its ISR services that are now available by the hour.

When it comes to platforms, Thales depends on others as the company’s added value is provided by its expertise in systems integration. Speaking to MT prior to PAS15, Pierrick Lerey, strategy and marketing director for Thales UAS and ISR activities explained: “We are not directly dealing with platforms. For this we need cooperation with UAS manufacturers. Typically, the manufacturer is prime whereas Thales is a Tier 1 partner due to our sensors with us providing 25-50 per cent of the mission systems”. Lerey continued: “we are well placed to understand UAS including C-UAS technology such as soft kill and hard kill systems.” 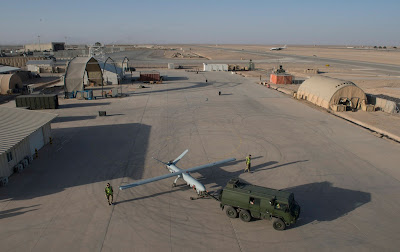 Hence, Thales cooperates with Infotron in offering the Spy’Copter which uses the IT-180 VTOL mini UAS while the Spy’Arrow and Spy’Ranger are both air vehicles designed by Aviation Design. These micro and mini UAS are complemented by Thales’ Spy’C multi UAS C2 system. Lerey revealed that Thales is currently looking to expand its micro and mini UAS offerings, “working with two or three more platforms right now.”

With its 20 kg MTOW, Thales’ Fulmar is a low end tactical UAS that also has sea landing capability which is enabled by the launching and recovery systems that are part of the system. Fulmar can be equipped with various sensors such as EO/IR in a dual gimbal, nano SAR, LIDAR, COMINT, CBRN detection or communications relay. With its 70 km range and eight hours endurance, the Fulmar comes together with its own datalinks and a GCS. 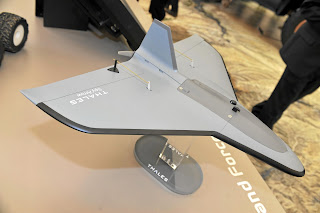 The flagship of Thales is Watchkeeper that is now in use with the British military albeit after some delay. Previous to Watchkeeper, Thales provided the UK military with ISR services by the hour flying over 100,000 flying hours with Hermes 450s between 2007 and 2014. The company indicates this was done while achieving more than 95 per cent availability, which is an impressive figure. Watchkeeper is now one of the prime contenders for a French army requirement for new tactical UAS which are needed to replace the current Sagem Sperwer. A strong selling point of Watchkeeper is its dual sensor payload that includes the Thales i-Master SAR/GMTI/MMTI radar. Lerey: “this multi-channel radar fits in a 15 inch turret that is easily swapable with an EO/IR sensor”.  Watchkeeper comes with ATOLS, wideband and narrow band datalinks, RVTs and a GCS. Thales also works on FCAS, the quest for an unmanned Anglo-French combat air system, working together with Selex on specifying and defining the system’s sensor suite.

A European Leader in UAS

Lerey boasted: “Thales is the only European company that masters the whole spectrum of secured electronic technologies for airborne systems.” Among its payloads are gyrostabilized high resolution EO/IR optronics with either onboard or offboard processing. Available are stacking, contrast enhancement, stabilisation, target detection/tracking, mosaic and 3D reconstruction features. All enrichment is done according to NATO STANAGs 4609 and 3189.

Thales also has considerable expertise in ESM with its COMINT systems featuring VHF and UHF direction finding capability. Its SIGINT systems are fitted in a small number of specially modified C160 Gabriel aircraft operated by the French military, others are part of the architecture of the ELISA and CERES SIGINT satellites.

Already mentioned in relation to Watchkeeper, iMaster is a high performance tactical ground and coastal surveillance radar. According to Thales no other small tactical radar offers equivalent GMTI performance. Operating in the Ku band, iMaster has a range of more than 27 km and weighs a mere 35 kg. The larger Searchmaster is considered by Thales to be the best-in-class multirole airborne surveillance radar that is usable for multiple sorts of missions. Despite it being designed for both land and sea operations, Thales is convinced that no compromise has been done in performance. Using AESA technology from the RBE2 radar found on the Dassault Rafale combat aircraft, Searchmaster has been developed for the Atlantique 2 MPA upgrade programme. It operates in the X band, provides a 360 degree view of the battlefield and can deal with up to 1000 target tracks simultaneously. Range is listed as being 200 nm with the radar weighing 77 kg.

The company’s Magic ATOLS is used for Watchkeeper but can also be easily integrated with other platforms. Enhancing safety, the X-band ATOLS uses a low power, large beam providing instantaneous wide area acquisition with it being able to detect, identify an air vehicle at ranges of approximately 10 km in less than one second. In the area of UAS communications, Thales too is deeply involved. The company provides end-to-end secure communications based on NATO standards, including SATCOM and IFF.

Handling a data rate of between 2 and 135 Mbps over a range of 200 km, its TMA/TMG6000 datalink complies with NATO STANAGs 7085 (ISTAR data) and 4660 (C2) which has the benefits of enhanced security, link reliability and interoperability. Also speaking to MT prior to PAS15, VP for radio communication products Hervé Derrey claims that “Thales is the first company that is compliant with both STANAGs”, explaining that the latest datalink is designed “to shorten the ISTAR loop”. With embedded COMSEC/TRANSEC, TMA/TMG6000 is touted as the first non-US terminal that has been certified by the Joint Interoperability Test Command (JITC) which is the US DoD’s operational test agency for information technology and national security systems. Derrey is convinced that the TMA/TMG6000 will allow for easy network allocation as it does not conflict with 3G, 4G networks while resistance to interception and jamming is said to be very high. Not yet fitted on the UK Watchkeeper, TMA/TMG6000 is on offer for the French army requirement. In early 2013 the system has also been demonstrated on the Neuron UCAV demonstrator.

Having sold more than 18,000 IFF systems for more than 120 different types of platforms (including 70 types of aircraft) to over 60 countries, Thales is truly a leader in this particular communications segment. Christophe Grosheny, one of the company’s communications specialists, describes the new TSC4000 transponder as the latest addition to the BlueGate range that also comprises the TSC2000, TSC2030 transponders and TSB2510, TSA/TSB2520 and TSA2540 interrogators. Certified for military and civilian use, the TSC4000 is a lightweight transponder that is designed to deal with UAS and light aircraft requirements. Featuring additional functions such as ADS-B, the latest transponder uses the same interfaces as found in the legacy products, albeit at half the weight. Essential for future military interoperability requirements, mode 5 comes standard on the TSC4000 as by 2020 mode 4 will no longer be in use. Grosheny indicates that ADS-B and mode S functionalities, both ICAO standards, are other important features as all state owned aircraft will have to comply with these by 2020 too according to US and European regulations. TCAS like alert and anti-collision features will also be integrated in the near future.

The TSA3520 interrogator has been selected for the French air force’s SCCOA programme which aims to introduce a new, highly automated C2 capability for air operations. Featuring new services, improved reliability and maintainability, and improved performance through three channel reception, the new interrogator is also being proposed to the United Kingdom through Thales partnership with Raytheon.

With regard to airborne SATCOM, Thales has a number of offerings operating in the Ka and Ku bands which provide data rates of between 100 kbps and 20 Mbps. These are compatible with both civil and military resources including Inmarsat. Available for light aircraft or helicopters, Antares uses a 40 cm dish enabling a data rate of 5 to 10 Mbps whereas the more powerful Astek can deal with over 20 Mbps. Featuring a parabolic dish, Astek can be used for MALE UAVs, UCAS, special mission aircraft, combat aircraft or even tankers. Several waveforms can be used allowing either for a very high but non-protected data rate, or a low to high protected data rate with no packet loss due to rotor blades when used on helicopters. The latest Antares-LP uses an active flat panel antenna, hereby optimizing the use of available bandwidth. Ground trials will be conducted this year while the new system will be tested in the air in 2016.

Its proven autonomous and secured technologies, advances in payload capabilities together with its expertise in civilian airspace integration and its qualification, certification and operational successes, have made Thales a leader in (tactical) UAS. Thales indicates it has had a €1.5 billion turnover the last ten years with its portfolio of UAS technologies having shown a significant expansion over the past five years. It is currently involved in the European SESAR programme that is aimed at safely integrating UAS into non-segregated airspace. One of nine SESAR projects, CLAIRE (Civil Airspace Integration of RPAS in Europe) is currently being run by Thales.

Its intricate knowledge of UAS and their mission systems also allows Thales to develop effective countermeasures against such unmanned systems. The company has on offer an impressive array of technology aimed at countering UAS. This includes COMINT sensors, jamming systems, active radars and passive sensors together with hardkill systems such as laser and other weapon systems.