Theissen Training Systems, for the first time ever, showed  the Hostage Traget System. It was developed in conjunction with the Kuwait National Guard, and is representing the next advanced level in shooter preparation. The world premier of that system was just a week ago at IDEX 2015 in Abu Dhabi. 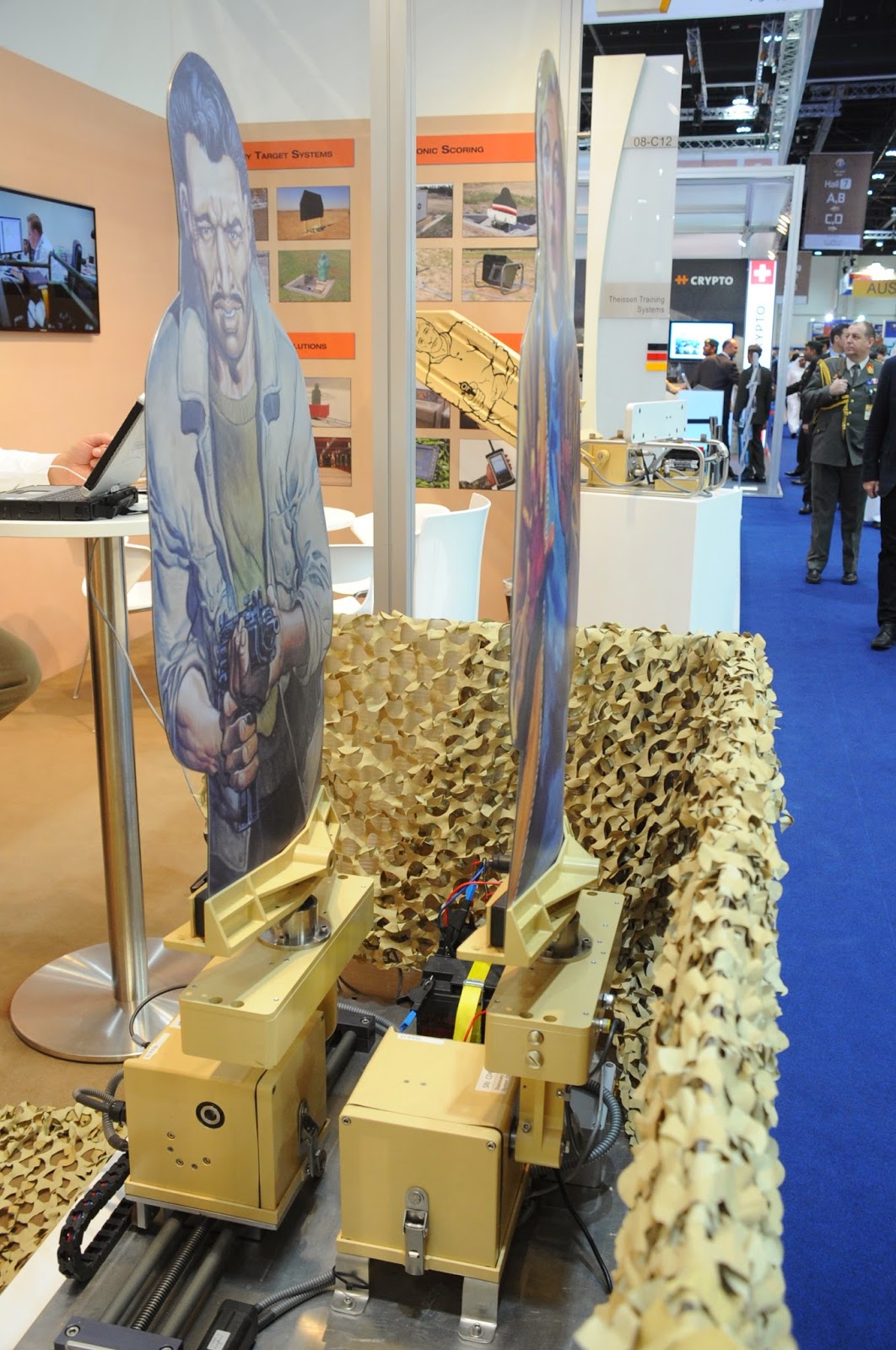 The target system consists of a combination of two independent infantry target mechanisms that are arranged to simulate hostage true-to-life scenarios.  The front target simulates the hostage while the automatically vertical and adjustable back target represents the hostage-taker.  The new target system has a dual purpose; serving as a hostage for rescue while simultaneously providing true target identification and shooter accuracy training to neutralize the threat. The target lifter mechanism, which lifts and lowers the hostage taker silhouette, is mounted on an automatic horizontal adjustable slider and is designed to change the distance to the hostage silhouette. This core-feature enables the end user to train his soldiers from a beginner level, with both silhouettes far away from each other, to a professional level, where the hostage taker is nearly invisible (hidden behind the hostage silhouette). Both target mechanisms are equipped with contact hit sensors to provide immediate feedback of the shooting skills by lowering either one, or both, of the silhouettes after a hit. Furthermore, the contact hit sensors distinguish which silhouette was hit and gives immediate feedback if the shooter hit the hostage and /or the hostage taker silhouette, thus providing skill development in the conduct of “Shoot/Don’t Shoot” training.

For further improvement of training sessions by producing meaningful shooting results, the professional sniper target can be equipped with a TTS Location of Miss and Hit (LOMAH) system. A sensor bar at the target end of the range detects the passage of supersonic projectiles through a professional sniper target and provides “X/Y” coordinate feedback to a display screen at the shooter’s firing point and/or a range control computer. This information displays a graphic interpretation of the Location of the Miss and Hit.

The Hostage Target System is available in a portable, battery powered (12 VDC, others on request, option: solar panel), rechargeable, and radio controlled version, equipped with a frame that accommodates all main components needed to be operated. No site preparation is necessary or required to emplace the system provided that the mechanism is protected from direct fire and ricochets. Hardwired and landline controlled configuration are also available.

It offers two modes: POP-UP (TARGET 1) & SHEARING (TARGET 2), time to expose and retreat is 0.8 sec. each, the hit counter has a frequency of up to 1,200 ROUNDS /min. and support single and burst firing modes. It is IP67 certified.

This infantry precision target system allows the correct detection of the location of the hit on the target and is even able to detect the exact location of near misses.
The LOMAH system (Location of miss and hit) or sometimes called AMS (Automatic Marking System) is designed to register the position of the hit on the target or the position of the miss graphically as well as x - y co-ordinate.The location of the actual hit or miss is registered independent of the used target material. There is no need of special targets, thus the customers standard target can be used. The shooter and the supervisor get immediated performance feedback of the position of the shot  on their screens.Registration is feasible for single shots as well as bursts of automatic weapons.The TTS LOMAH system is designed to be used as a stand - alone unit or as an add-on unit for existing stationary or moving target appliances.

LOMAH Infantry is able to:

Posted by MILITARY TECHNOLOGY at 08:41