The German Air Force (Luftwaffe) already has a large number of simulation systems. Mainly developed and introduced for weapon system-specific training, these systems support basic and follow-on training as well as realistic pre-deployment training and post-deployment activities of Luftwaffe personnel. Simulators can be employed irrespective of environmental influences, such as weather conditions and therefore are available around the clock. State-of–the-art technology makes it possible to exercise and train under simulated extreme conditions while saving resources and original equipment. For this to remain like that, training means and methods need to be constantly further developed.


The Luftwaffe has been applying new approaches for technology-based training within the scope of its modern training technology (MTT) concept for quite some time now. Already in 2012, the “Eurofighter Ground Check Run” project was developed under the lead responsibility of the Luftwaffe Support Command. It merges real-time videos, conventional documents and simulated processes into an integrated three-dimensional learning environment. A development team from the Luftwaffe Engineering Training Center was awarded the “eureleA-2012” (European Award for Technology Supported Learning) in the “Best Technical Implementation” category for this effort.
In the meantime, a further step has been taken for an even more effective and realistic web-based flight training on a networked modern platform. In July 2014, a team from the Luftwaffe Engineering Training Center in Kaufbeuren, Germany travelled to Goodyear, AZ/USA, in order to carry out preparations for a complex procedural trainer for the Grob 120A on site. Designed as a cockpit trainer for a single-engine aircraft, this trainer will be used for primary flying training, allowing students to train standard and emergency procedures in accordance with the flight manual. The procedural trainer will be implemented on the basis of the MTT learning programme. The system offers a multitude of possibilities for training and subsequent analyses in order to create an optimum learning effect.
During its stay at Goodyear, the team collected all relevant data from checklists and numerous manuals, creating photo and video material and processing the data for use in different media. Even the smallest details had to be captured since it would no longer be possible to integrate further information on the Grob 120A in a timely manner during the subsequent implementation phase in Germany.

Thus, every working day ended with a debriefing and a precise definition of the next day’s schedule. Material which for reasons of quality could not be used for the procedural trainer had to be recreated. For this reason, continuous guidance by the flight instructor of 3rd Luftwaffe Training Squadron was of particular importance. In this way, the authors immediately received answers to their questions so that even those processes deemed complex from their point of view were understood. 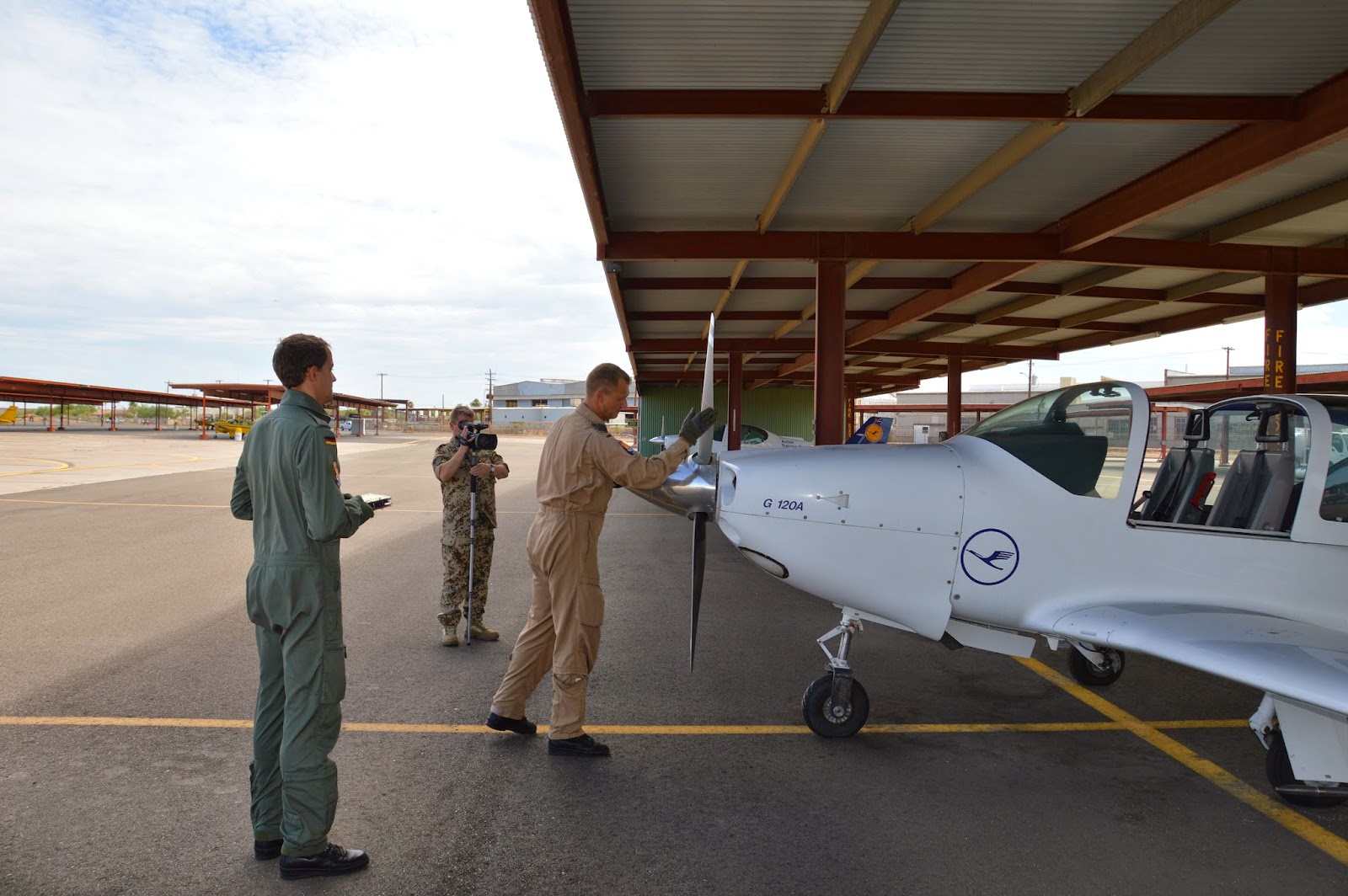 Training in the virtual procedural trainer will mainly be based on a simulation of the entire check list with the exception of the phase of flight. For this purpose, the flight instructors conducted a theoretical instruction on all relevant documents before demonstrating examples of the pre-flight inspection by performing the before exterior inspection and the walkaround (visual inspection by the pilot) in practice. Thus, every single step could be documented by photo and video recording. The example of the walkaround clearly shows that an integration of high-quality video elements into procedural trainers is indispensable. Video sequences help student pilots to achieve the desired learning and training success, in particular where complex procedures or visual examinations are concerned.

A special highlight of the implementation was a flight in a Grob 120A during the second week. Here it became evident that the conceptual groundwork of the preceding days had served its purpose. Theoretic lessons learnt so far were now seen through the eyes of the student pilots. Flight preparations, the execution of the entire checklist down to take off, the flight phase, touch & go, different traffic patterns and the final approach with the landing at Goodyear – every step matched the theoretical instructions! The flight complemented the data collection phase by providing first-hand impressions.

The package of tasks for the creation of the procedural trainer, which was based upon the flight training syllabus, had already been agreed upon in advance. Getting these tasks done posed a major challenge since only a limited amount of time was available and all work involved had to be strictly organized. Nevertheless, the team managed to prepare detailed prerequisites for possible further development tasks and record them by means of appropriate media. 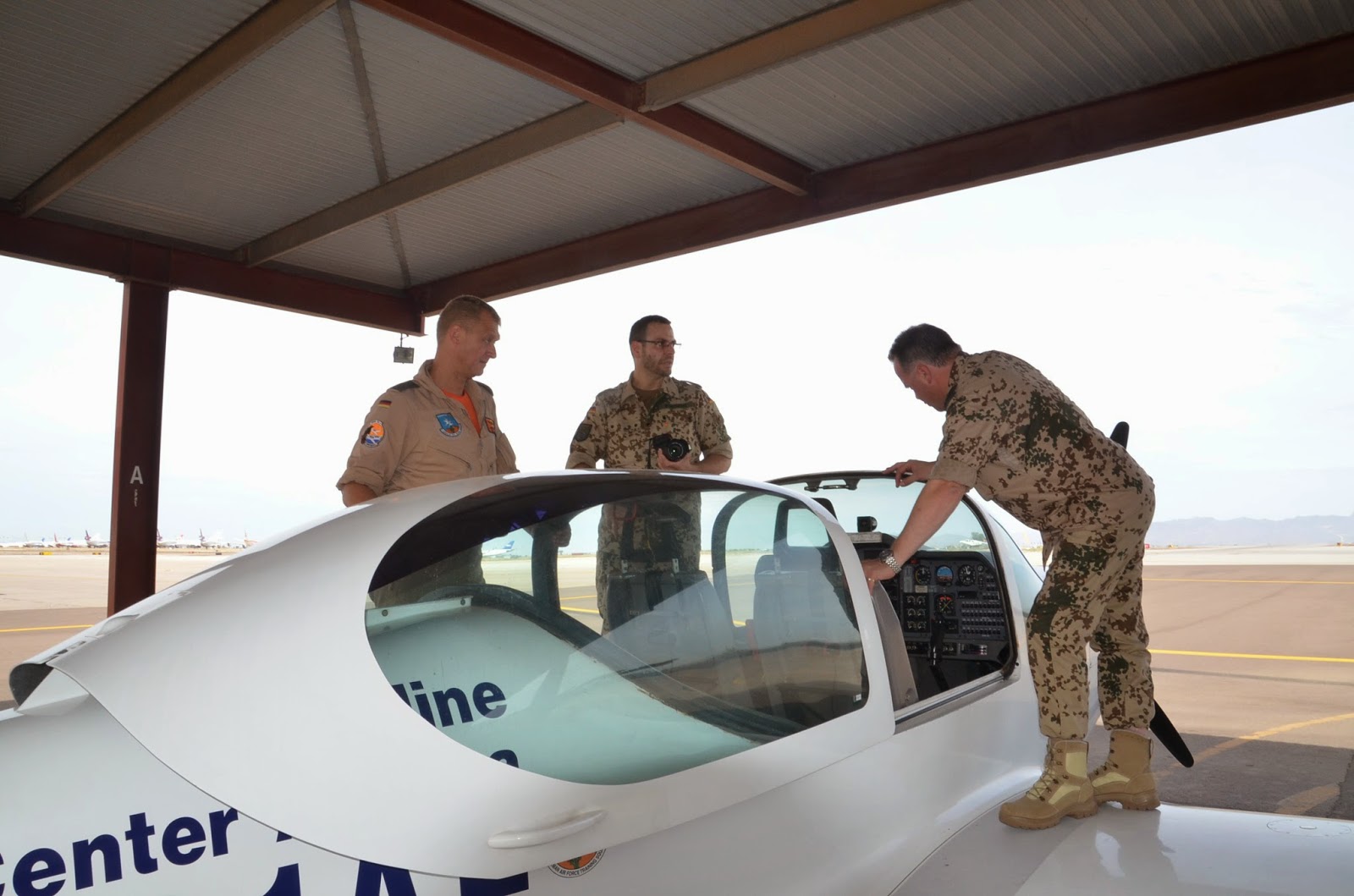 The project is currently in the production phase, which means that 3D modelling is taking place at the Luftwaffe Engineering Training Center in Kaufbeuren. What will be created during this process is a realistic representation of the shelter area and an entire Grob 120A model including its cockpit.
A major advantage in this context is the web-based publication of the application. Future users in the US will be able to track the development status of the procedural trainer on the Bundeswehr intranet in real time. Based on previously determined test criteria and the requirements catalog, they will follow the further development of the simulator, thus providing a further instance of quality assurance during development. 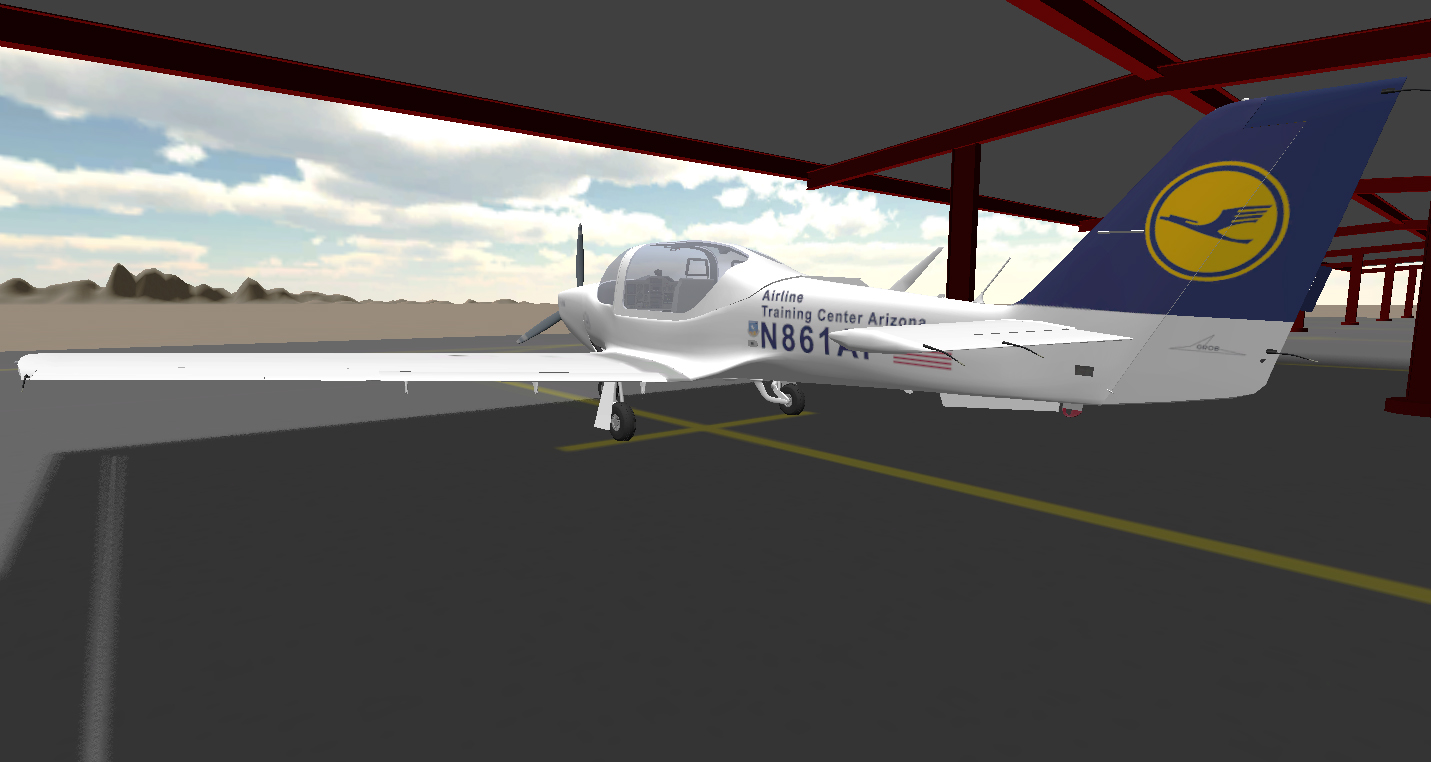 The procedural trainer will be operationally available at Goodyear in the first quarter of 2015. This will also mark the start of a new era in primary flying training for the young student pilots of the Luftwaffe. Where until now flight training could only be conducted directly on the aircraft or by theoretical training, the procedural trainer now opens up entirely new possibilities. Restrictions owing to limited availability of resources will be minimised.

Future Luftwaffe pilots will be introduced to the methodology of the cockpit functions already during pre-flight training and prior to the start of their training at Goodyear. Within a year’s time, another procedural trainer will be set up at the Luftwaffe Officer School in Fürstenfeldbruck, which will allow elements of flight training to be conducted in student numbers up to classroom size.