Turkish-Russian Relations: Between Warning and Shooting Down

The year 2015 saw steady deterioration in Turkish-Russian relations whether or not we refer to the possible construction of the Turkish Stream natural gas pipeline that failed to be materialised; the request of Turkey in receiving further discount for natural gas prices that was not granted; or the most important - the Syrian crisis. According to Turkish President Erdogan and Prime Minister Davutoglu, Syrian President Assad should have been removed from the scene as long ago as 2011. According to Russian President Putin and Prime Minister Medvedev, the fate of Assad should be decided by the Syrian people and not external powers. Turkey’s opening of the Incirlik, Turkey airbase to US military jets has further escalated Moscow’s concerns. As a countermove, Moscow has boosted its longstanding military relations with Syria and sent military jets to the Khmeimim airbase in Latakia, Syria. Interestingly enough, on 23 September 2015, Erdogan visited Moscow, where Erdogan was said to be especially annoyed that he was not consulted about Russia’s intentions to begin an air operation in Syria and that despite the fact that Turkey considered Russia its strategic partner.

The Russian military involvement in Syria that began on 29 September was the last straw that has further aggravated already strained relations. In the words of Murat Bilhan, retired Ambassador to Moscow and the former Head of the Turkish Foreign Ministry’s Strategic Research Centre: “Now Russia found the time and the place to use its [military] power. This has always been the Russian mentality, back to the Soviet days and it has not changed.” What is important to state is that Putin and his administration felt that they are the ‘Untouchables’ and are free to operate in Turkey’s airspace, closely adjacent to Syria. In other words, Russia knew of the risks if its combat aircraft did stray into the blurry boundary between Syria and Turkey and was ready for them. Russian officials no doubt will dismiss these assertion straight away.

In three separate incidents, on 3 October and 4 October, Turkish airspace was violated by a Russian Su-30, Su-24 and a MiG-29 with unidentified origin. Turkey and its NATO Allies have dismissed Russian explanation that claimed the violation was accidental, due to weather conditions or perhaps a navigational mistake. The NAC warned Russia on 5 October that it was courting ‘extreme danger’ by sending warplanes into Turkish airspace. Following these incidents PM Davutoglu has said: “Let me put it bluntly: Turkey’s rule of engagement are valid for Syria’s, Russia’s or another country’s warplanes. The Turkish Armed Forces have been issued with open instructions,” namely, to shoot the warplane down. Still, I assume that Putin was fairly certain that Davutoglu’s blunt warning was either bluffing and, as a result, should not be taken seriously.

It should be emphasised that Russia has a history of testing the boundaries of the airspace of other countries, including in Northern and Eastern Europe and returning unopposed. As a result, the Russian Air Force continued its operation in the closely adjacent Syria/Turkey airspace. On 16 October, the Turkish military shot down a Russian-made UAV that had entered its airspace. Russia, however, denied that the UAV belonged to its forces and continued its air operations. Still, the Turkish government reacted with restraint. In the words of Erdogan: “The reason why worse incidents have not taken place in the past regarding Syria is the cool-headedness of Turkey.”

The continued Russian air operations in the vicinity of Turkish airspace, denied by Russia, put the credibility of the Turkish government online and, the raising the stakes for the Turkish government this time around. Therefore, the shooting down of the Russian-built Su-24 on 24 November was bound to happen sooner rather than later despite early warnings. Post shot down statement of Putin that Turkey’s action was, “a stab in the back,” carried out by the, “accomplices of terrorists,” lacks credibility and is mainly addressed to the Russian audience. Despite the effort to de-escalate the situation both sides hardens their position, thus, a future shoot down can happen again.

What is clear is that 24 November can be called a Turkish Russian Rubicon and relations between Turkey and Russia will not be the same as before. The main thrust of Turkish-Russian economic relations including the energy issue has to be revised and Turkish government should ultimately understand that Russia is not a strategic partner and cannot be trusted. The so-called cosy personal relations between Putin and Erdogan have reached their end. The new relations should be based on clearly articulated pros and cons and in the field of trade, economics and tourism should be strictly business oriented.

Dr. Eugene Kogan is a noted expert in the field of defence technologies, and a regular contributor to MT. 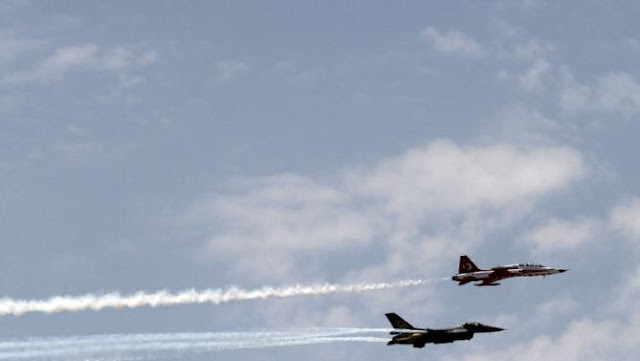 Posted by MILITARY TECHNOLOGY at 11:47