The German Ministry of Defense (MoD) will pursue Northrop Grumman’s MQ-4C TRITON HALE UAS as the preferred alternative to the cancelled Eurohawk, it has informed parliament in late April. A formal decision on which platform will replace the ill fated EUROHAWK will be taken in 2016 at the latest. The EUROHAWK programme was aimed at replacing the SIGINT capability that was lost when Germany phased out its specially configured Atlantic MPAs in June 2010. The requirement was for five aircraft including the EUROHAWK demonstrator aircraft that was ferried to Germany in mid 2011. However, the programme was cancelled in May 2013 by then minister of defence Thomas de Maiziere as there were severe problems with regard to airspace integration and airworthiness certification, the latter in no small part due to a lack of technical documentation concerning the aircraft. Concurrently, the German MoD questioned EUROHAWK s mission planning system as well as its sustainability as the USAF seemed to be pulling back from GLOBAL HAWK at the time. 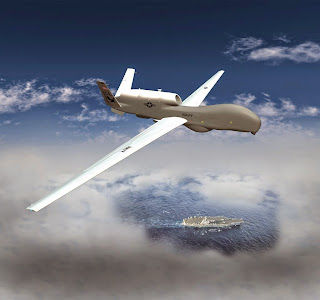 As early as April 2012 the Bundeswehr started looking into various manned and unmanned options that could be fitted with Airbus DS’ Integrated Signals Intelligence System (ISIS) first flown on the EUROHAWK FSD in January 2013. In late 2012, out of eleven possible alternatives that had been identified, three platforms were selected, these being the Airbus A319, IAI’s HERON TP and Airbus DS’ Future European MALE (FEMALE) UAV based on the TALARION design. In early 2013, the Airbus A310 was added to the list. However, by September 2014, it emerged that the Bundeswehr had identified three different alternatives, first and foremost the MQ-4C with the Bombardier GLOBAL 5000 executive jet also being mentioned either with ISIS or an alternative suite. This would be the ELI-3001 Airborne Integrated Signals Intelligence System (AISIS) proposed by IAI Elta together with German company ESG, a model of which was shown during the Berlin ILA airshow in May 2014. The MQ-4C Triton is being favoured due to what the Bundeswehr indicates is its superior performance when compared to the other two options while the relative ease with which it could be fitted with the newly developed SIGINT suite appears to be another important criterion. As a result, the German MoD is now aiming for a FMS deal while it has also decided to resume trials with the Eurohawk FSD. These are needed to certify Airbus DS’ ISIS suite which has been described by Bundeswehr officials as a very promising system that will meet its COMINT and ELINT needs.

However, it remains to be seen how procurement of TRITON would solve some of the issues that led to the cancellation of the EUROHAWK programme. Based on the Block 30 Global Hawk, the MQ-4C is near identical to the Block 20 GLOBAL HAWK on which EUROHAWK is based, both models being capable of carrying a 3000 pounds payload. On a positive note, the USAF has decided to continue operations with its fleet of GLOBAL HAWK UAS until at least fiscal year 2032 with the service life of a GLOBAL HAWK eing estimated at 20 years. The new MQ-4C is expected to reach early operational capability in 2017, while the US Navy has decided to retrofit an due regard radar into the aircraft in the 2020 timeframe allowing for non-cooperative detection of other aircraft. This will likely be Exelis’ SkySense 2020H airborne sense and avoid (ABSAA) system. The flight of an USAF RQ-4 GLOBAL HAWK from Sigonella, Italy through UK airspace into Norway during NATO’s joint ISR exercise Unified Vision 2014 in May 2014 was partly aimed at alleviating German airspace integration and airworthiness concerns. It has also been announced that Northrop Grumman’s HALE UAS will participate in the upcoming exercise "Trident Juncture 2015" in an effort to test Alliance Ground Surveillance (AGS) interoperability. The main aim of the exercise that will be held in Southern Europe in September is to train and test the NATO Response Force. It also remains unclear how the latest decision to pursue TRITON will affect plans by Germany to acquire four IMINT configured Block 40 GLOBAL HAWKs  as a national contribution to NATO’s AGS programme. In 2012, NATO committed itself to procuring five Block 40 GLOBAL HAWKs  that will be fitted with the Multi-Platform Radar Technology Insertion Program (MP-RTIP) active phased array side looking radar and will be based at Sigonella. In March, the wings of the first air vehicle left their manufacturing site in Dallas, Texas to be mated to the NATO01 fuselage that is currently being integrated by Northrop Grumman at Palmdale in California. The fuselage for the NATO02 air vehicle has in the meantime also arrived in Palmdale.