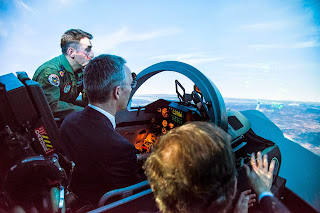 Havelsan gets ready to make a big step to have its name and capabilities known on international platforms by having their simulators used by Air Force personnel of NATO allied countries within the concept of the Multinational Military Flight Crew Training Centre Project, constituting one of the primary aims of the visit.

As an high tech defence cooperation initiative, the Multinational Military Flight Crew Training Centre Project aims to have simulators and co-systems developed by Havelsan used as a common pool. Thusly, it is intended to provide standardised aircrew training for NATO allied countries with Turkey as the lead, sharing flight training experience, developing new cooperation areas among allies and minimising training costs.
Posted by MILITARY TECHNOLOGY at 17:55