Blighter Surveillance Systems, Chess Dynamics and Enterprise Control Systems unveiled the Anti-UAV Defence System (AUDS) to the media on 18 May in London. The solution integrates an electronic scanning radar; electro-optical camera; and RF jamming technology into a single package to detect, identify and disrupt UAVs which could be carrying weaponised payloads including improvised explosive devices (IEDs).

The development follows multiple incidents involving unmanned systems over recent years including the landing of a UAV on top of Japanese Prime Minister Shinzo Abe’s residence in Tokyo (carrying traces of radioactive material); vertical take-off/landing (VTOL) UAV incursions over UK and French nuclear bases; and a quadcopter UAV which hovered within metres of German Chancellor Angela Merkel at an event in 2013.

Other incidents include dozens of high profile events which have seen UAVs interfering with aircraft at major international airports, including London’s Heathrow; and police helicopters in New York City.

“The threat is the small, hobbyist drones you can buy on the internet,” explained Blighter Systems CEO Mark Radford, while explaining how the AUDS solution is capable of detecting and neutralising UAVs.

The radar is a development of a ground surveillance radar, and a variant of  the Blighter A400 Series Ku band electronic scanning air security radar which is currently deployed with the British military as well as London Heathrow Airport, as well with Republic of Korea government in the demilitarised zone. Capable of detecting a body crawling on the floor, the radar is capable of providing a 180-degree scan at a maximum range of 8km.

According to Graham Beale, managing director at Chess Dynamics, the EO camera is based on the company’s Hawkeye product which comprises MWIR and LWIR TI capabilities and a 36-degree field of view. He added that a high-quality TV day/night camera was also required because not all UAVs are big enough to emit a strong thermal signature.

Both the radar and EO camera sensors are integrated to a Smart RF jammer or inhibitor, as provided by Enterprise Control Systems (ECS). This multi-band jammer is capable of disrupting GPS, control and telemetry channels of the target UAV via a directional antenna capable of focusing power in the direction of the air frame.

According to ECS’s David Morris, the Smart RF Jammer is derived from counter-IED technology. “We have adapted this technology to counter this new and emerging threat. You can’t sit on your laurels but instead have to invent different techniques to identify and disrupt different parts of the UAV,” he explained.

“We know the vulnerabilities of data links and no system is perfect. We certainly know how to mess up a data link,” Morris added while describing the company’s exposure to counter-IED technology.

The basic concept of operation (CONOP) of AUDS sees the radar automatically scan the sky to identify a threat. Once this has been completed, the radar hands control to the EO camera which vertically scans the general area where the radar identified the UAV in order to find and fix the threat before the RF jammer is finally engaged to disrupt and neutralise the target.

Neutralisation of the UAV comprises either landing it in a controlled manner or disabling controls and allowing gravity to take hold.

According to the companies involved, the duration of the process depends on the type of UAV being tracked although there is no restriction on the size or speed of air frame which can be tracked. However, for larger threats such as fixed wing UAVs travelling up to 100kph, AUDS would most likely be able to detect a threat at a range of 5km; with EO camera deployed to find and fix the threat at 4km; and finally the RF jammer being initiated at 2.5km from target. Neutralisation of the target UAV would take just seconds to execute, it was added.

So far, demonstrations have focused on small VTOL UAVs travelling at low speeds which have seen detection successfully executed at a range of just 2km before rapidly deploying the EO camera and RF jammer to detect, track and neutralise the threat.

ECS explained how the RF jammer comprises a 20-degree beam wave, before adding how it was up to the user to facilitate a CONOP for the technology. It was added that AUDS is capable of tracking multiple targets although only a single UAV could be disrupted at any particular moment although subsequent targets could be prioritised for follow-on neutralisation.

Similarly, a number of AUDS could be networked together to provide coverage over a wider area of interest although the companies involved conceded that the current variant was not yet mature enough to handle restrictions associated with blocked radar signals and narrow FoV in and amongst tall buildings in the urban environment.

However, it was added that urban trials are expected to be conducted in the future in order to best identify how to counter UAVs in this type of environment.

To date, a number of government-sponsored trials have been completed in the UK and France with respective ministries of defence witnessing the capability of AUDS. A total of 80 hours of operation has been completed by the system to cover 150 UAV sorties. A further trial programme is scheduled in the US and Canada this year at an undisclosed location.

“In March 2015, the AUDS team took part in multi-supplier French Government trials in Captieux, France, where its counter UAV system proved highly successful in detecting and neutralising a variety of fixed and rotary wing micro, compact and standard UAVs. And last week, the system also performed well in UK Government sponsored counter UAV trials in West Freugh, Scotland,” a spokesperson added.
“The AUDS system is designed for counter-UAV operations in remote border sites or urban areas. It can be operated from fixed locations and from mobile platforms,” it was added.

The companies also described how AUDS could be integrated into a wider air defence system, such as that deployed ahead of the Olympic Games in London during 2012. “AUDS could have supported the military radars with a non-kinetic effect,” Radford added.

He also explained how AUDS was suited to Very Short Range Air Defence (VSHORAD) operations, with longer range threats being detected and dealt with by larger systems. “AUDS counters malicious use of commercially available UAVs,” he said. 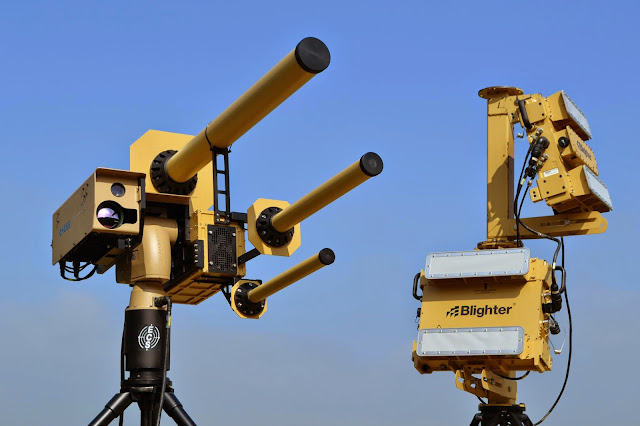 Posted by MILITARY TECHNOLOGY at 00:28